U.S. Strategic Interests in the Middle-East

Introduction:
The Middle East lies across the shortest route by sea connecting Europe with South and Southeast Asia and exports a major share of the oil and natural gas that fuels the world's industrial economies. The Persian Gulf has two-thirds of the world's proven oil reserves. Saudi Arabia alone has more than a fourth of world reserves and Iraq is believed to have the second largest reserves.

Middle East countries have been a US interest since decades for their energy resources and geopolitics situations. During the Cold War US had a geopolitical need to keep this region under its authority to keep a way of pressure in USSR.

Soon after World War II and as the Cold War was beginning, the Gulf began to produce a significant share of the world's oil: 17 percent in 1950, 25 percent in 1960, and 27 percent in 1990. The United States had just become a net oil importer and economic recovery in Europe and Japan depended upon Middle East oil. As Britain withdrew from the Middle East, the Americans stepped in to secure a steady supply of oil at low and stable prices and to limit Soviet influence; oil security remained a basic policy goal even after the dissolution of the Soviet Union. In response to successive crises and challenges, the United States involved itself more directly in the Persian Gulf and Central Asia instead of retreating. 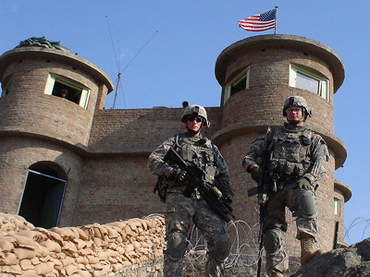 • President Eisenhower extended the policy of containment and the Truman Doctrine (providing military and economic aid to free nations facing internal or external threat) to the Middle East in 1957. This policy led to conflict with countries such as Egypt, which received aid from the USSR. The United States wanted to keep access to the Suez Canal open because of its strategic location linking the Red Sea and the Mediterranean.

• As in Latin America, the United States sometimes supported corrupt dictators in the region who were friendly to the United States and opposed communism. Support for the shah of Iran led to the Iran hostage crisis in 1979–1980.

• Beginning with President Nixon, the policy of containment led to a more practical approach based on protecting U.S. interests in the region. Foremost among these is U.S. dependence on foreign oil. American oil companies have been involved in the region since the 1930s. The Middle East oil industries were nationalized in the 1960s, and the Organization of Petroleum Exporting Countries (OPEC) was created. OPEC’s control of much of the world’s oil supply led to oil shortages and price increases during the 1970s.

• To protect its interests, the United States has established military bases in friendly countries such as Saudi Arabia and Qatar throughout the region. Many Arabs, especially Muslim fundamentalists, oppose the U.S. presence and what they see as its unconditional support of Israel.

• Iran and Iraq fought a long war during the 1980s. The United States backed Iraq and Saddam Hussein because of strong opposition by Iran to the United States.

• Saddam Hussein’s invasion of Kuwait in 1990 led to the Gulf War in 1991. Iraq’s move was seen as a threat to oil fields in Saudi Arabia, and a severe threat to U.S. oil supplies. The United States formed a large international coalition and led troops against Iraq. After a six-week long war, Kuwait was liberated, but Hussein remained in power in Iraq. The United States then asked the UN to impose economic sanctions against Iraq in order to prevent the country from rearming or building nuclear weapons.


Post 9/11 Scenario
September 11, 2001 brought changes to the rules of the international system established at the end of the Cold War. The collapse of the Soviet Union allowed the United States to reign at the top of the international area. It was able to dominate the world as the only superpower in possession of superior capabilities and was able to impose its particular interests in political, military, and economic issues. It seems that eventually one voice was strong enough to answer Washington and the new thing is that this voice does not emerge from a concrete actor, as the USSR used to be. The terrorist groups are this new voice and that creates a set of new rules as they cannot be precisely identified as a concrete state-enemy. They are informal groups which cannot be localized and without a direct interlocutor to negotiate with. Faced with these new asymmetrical difficulties, the Bush administration decided to enter in conflict against the states where these terrorist groups were supposed to be located with a focus in the Middle East, and went back to an offensive interventionist foreign policy, named The War on Terror.


United States Post 9/11 Strategy in the Middle East
1. America is on the offense against the terrorists. We are using every element of national power to confront al Qaeda, those who take inspiration from them, and other terrorists who use similar tactics.

3. America has launched a bold agenda to defeat the enemy's ideology by supporting the Forces of Freedom in the Middle East and beyond. Americans believe that all people have the right to determine their destinies, and we know, by history and by logic, that promoting democracy is the surest way to build security.

4. America has a clear strategy to help the Iraqi people protect their new freedom. The Iraqi people have reclaimed their sovereignty, voted in free elections, drafted and approved a democratic constitution, and established a constitutional democracy. At every step along the way, our enemies have failed to break the Iraqi people's courage or stop the rise of Iraqi democracy.

6. The Future Of Afghanistan Belongs To Freedom. Taliban and Al Qaeda elements are attacking Afghanistan's institutions, but they will not derail democracy and freedom. Forces from 40 nations, including every member of NATO, are now serving alongside U.S. troops to bolster the new Afghan government. 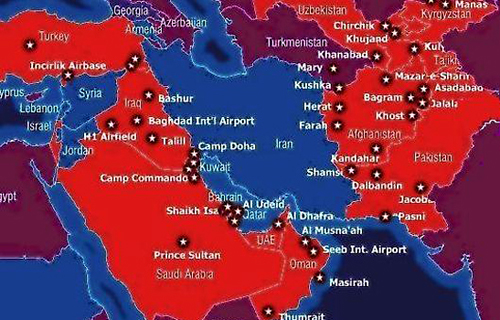 U.S. Military Bases in the Middle East
American military involvement in the Middle East increased during the 1970s following a series of sudden shifts in the regional balance of power. In 1971, Great Britain pulled its armed forces out of the Persian Gulf. In early 1979, Islamic revolutionaries inspired by the Ayatollah Khomeini toppled the shah of Iran, and then took fifty-three U.S. diplomats hostage in November. One month later, Russian troops invaded Afghanistan to prop up the pro-Soviet government in Kabul.

The Iraqi invasion of Kuwait on 2 August 1990 triggered a dramatic escalation of the U.S. military presence in the Persian Gulf. Fearful that Saddam Hussein might attack Saudi Arabia next, President George Bush sent 200,000 American troops to the Persian Gulf as part of Operation Desert Shield in late August. Determined to force Saddam to pull out of Kuwait, Bush increased the number of U.S. soldiers and sailors in the gulf to 541,000 by the end of the year and put together a broad anti‐Iraqi military coalition that included America's NATO allies and several Arab states, among them Egypt, Syria, and Saudi Arabia.

Today the US has a large military presence in the Middle East. With the ongoing United States involvement in the Middle East, military presence dictates the formation of forward operating bases from which to coordinate military actions and house troops. Most, though not all, of these bases share areas for more than one of the branches of the United States Military: the Army, Air Force, Navy or Marines.