For the past few decades, the world has witnessed much change in the international political and diplomatic system. Throughout history, traditional diplomacy has been characterised as a business by men, for men, and a typical diplomat was always pictured as a male diplomat. This stereotype has remained a source of major difficulties for women aspiring to enter the field of international relations and diplomatic services at both junior and senior level. The existing power structures reinforced gender inequalities and underpinned the fallacy that “this is not a faculty a girl would apply to”.

However, since the 20th century, women have been admitted as candidates for diplomatic positions, just like their male counterparts. They were no longer considered only for junior positions that served male government officials but also for senior positions as well.

The number of women serving in the diplomatic field increased over the past decade, but these changes were more common in the West than in the rest of the world, including Asia. For instance, the FCO had a 40 per cent female representation; 45 per cent of the fast stream intake were women in 2012 and in the same year, the Global Gender Gap Report of the WEF showed the UK ranked 18th out of 135 countries, while China was ranked 69 and Japan was ranked even lower at 101 (WEF, 2012).

This study starts from the hypothesis that, whilst the role of women in diplomacy was not very significant in the past; it seems to have improved greatly and female diplomats have become more prominent in recent decades. Women in developed countries such as the United States of America and most European countries have gained more visibility in the public sphere in general and political and diplomatic fields in particular through their professional achievements. The rise of female political leaders such as Margaret Thatcher in the United Kingdom and the high profile Madeleine Albright acquired in the USA seem to have paved the way for an increasing representation of women in diplomacy, albeit at a slower pace in East Asia. The main aim of this research is to explore the changing role of women diplomats in the 21st century worldwide and to analyse the current representation of women in the diplomatic field with a special focus on South Korean women diplomats and politicians. Particular attention will be placed on three areas: gender equality, opportunities available to female diplomats and the challenges they are likely to face. 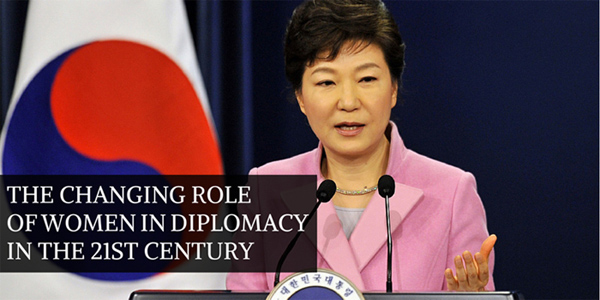 The interest in this topic stems from the researcher’s personal interest in the growing role of Asian women in the political and diplomatic fields and in the belief that the success achieved by South Korean female politicians and diplomats could serve as the example to emulate in the rest of South East Asia and the developing world.

This paper reflects the ever changing nature of diplomatic practice and is relevant to key players and new participants in the diplomatic world of the 21st century. It would hopefully be a welcome addition to the rather limited literature and research available on women and diplomacy in general and the growing role of East Asian women, particularly South Korean women in the political arena....